May 10, 2007 Chosun Daily/ For one hero who made a noble sacrifice during the Korean War 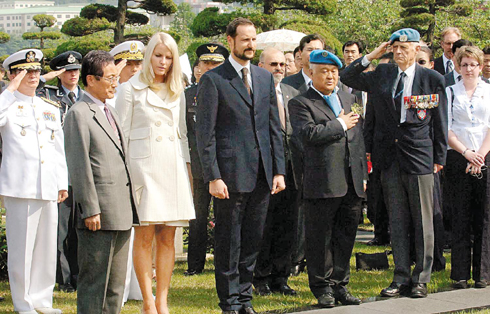 Unveiling ceremony of the Norwegian memorial in commemoration of the Norwegian contribution during the Korean War
The visitors from the Northern European nation kneeled down in front of a grave at the UNMCK. It is the grave of “Reidar Tveit” from Norway, who was among 623 medical staff members dispatched to Korea from Norway during the Korean War. In the war, three died and one of them is yet interred at the UNMCK.
To one man, Their Royal Highnesses Crown Prince Haakon and Crown Princess Mette-Marit visited the UNMCK and paid their tribute. Also during their visit, there was an unveiling ceremony of the newly erected Norwegian Memorial, lead by Their Royal Highnesses, in commemoration of the Norwegian contribution to the Korean War.
Ms. Sandaas and her daughter paid tribute to “Tveit”, their father and grandfather, on their knees.
Ms. Sadaas said, “It’s my great honor for Their Royal Highnesses to remember my father’s sacrifice,” and moved to tears.
The Norwegian memorial measures 42cmx17cmx79cm. The Public Relations Officer of the Royal Norwegian Embassy explained, “The Memorial, made of Norwegian stone, was designed in order to present “homeland” for the fallen. The Public Relations Officer of the UNMCK added, “It’s a memorable ceremony of paying tribute to the war hero who died for peace and freedom.”
List