Korean War veterans honored through portraits on banner in Busan 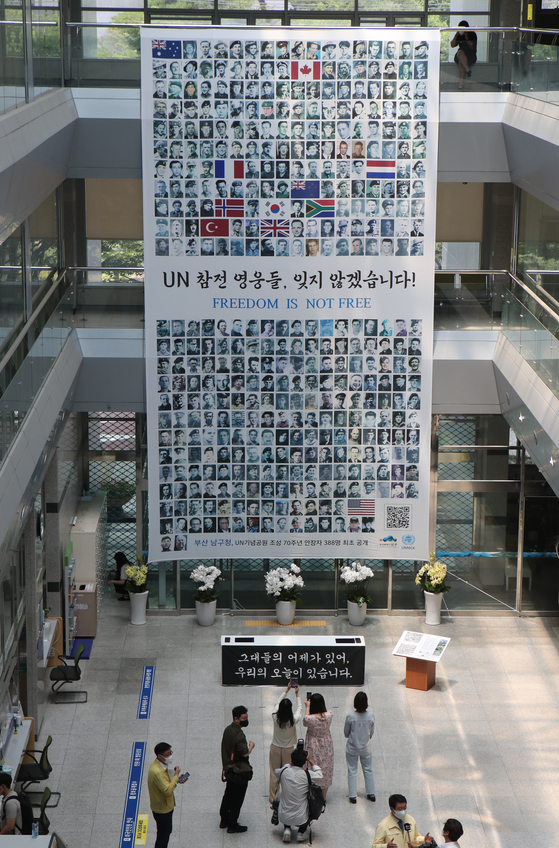 The banner exhibiting the portraits of 388 Korean War veterans is placed at the Nam District Office in Busan on Thursday to commemorate the 71st anniversary of the outbreak of the Korean War and the 70th anniversary of the foundation of the UN Memorial Cemetery in Korea in Busan. [SONG BONG-GEUN]

The portraits of 388 veterans who fought valiantly in the Korean War (1950-53) and were interned at the UN Memorial Cemetery in Korea (Unmck) were honored on a banner at the Nam District Office in Busan on Thursday to commemorate the 71st anniversary of the outbreak of the war and the 70th anniversary of the foundation of the cemetery. “It is very meaningful to honor and remember the UN veterans who gave their lives for the Republic of Korea,” said Hur Kang-il, custodian of the Unmck, at the ceremony on Thursday. “Without their noble sacrifice and dedication, the Republic of Korea would not exist today. In celebration of the 70th anniversary of the creation of the Unmck, we are very happy to exhibit 388 portraits of the veterans at the Nam District Office in Busan.” Nearly 2 million people from 22 nations answered Korea’s call for help when the war broke out with the invasion of North Korea into the South on June 25, 1950. Of the veterans, 2,311 from 11 nations are interned at the Unmck, of whom 36 were interned per their posthumous will. To remember their sacrifices, the Nam District Office of Busan with the Unmck decided to honor some of them with a banner showing their portraits. Covering the banner titled “Freedom is not free” are the portraits of 388 veterans. The banner extends from the fourth floor of the Nam District Office to its lobby. They include Private James Patrick Daunt of Australia, who is the youngest of all soldiers who gave their life fighting for Korea. He died at the age of 17. The face of Reidar Tveit, the only Norwegian veteran interned at the Unmck according to the Nam District Office, can also be seen on the banner. Also exhibited is the portrait of American Gen. Richard S. Whitcomb, who is the only general interned at the Unmck. He was dispatched to Korea in 1952 and continued to volunteer in Korea after 1954. His records show that in 1953 he shared some of the U.S. army resources with locals following a big fire in Busan that year. He married a Korean woman named Han Myo-sook, and today, both Whitcomb and Han are interned at the cemetery. “Many of the portraits of the veterans we have are thanks to the help of veterans and their relatives,” the Nam District Office said in its statement. “The reason why many of the portraits exhibited are of Canadian and British soldiers is because veterans like Canadian veteran Vincent Courtenay and British veteran James Grundy have sent them in after procuring them through their veterans associations.” The banner exhibition will stand until July 27.  BY ESTHER CHUNG [chung.juhee@joongang.co.kr]
List