Recapture of Seoul and Marching North 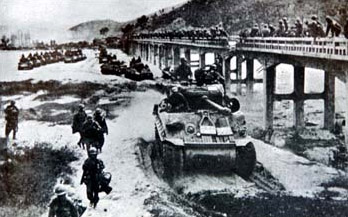 With a general counterattack and the Incheon landing of 15 September, the UN and ROK forces turned the momentum of the war and recaptured Seoul. When the allied forces reached the 38th parallel, the United Nations Command conducted a North Korean operation to eradicate North Korean troops based on the UN's 6•28 resolution and the “Principles of Pursuit” of military operations.

On the 1st of October, the ROK army launched its North Korea operations while UN forces broke through the 38th parallel on 9 October, capturing Pyongyang on the 19th and advancing to the Cheongcheon River on the 23rd. On 24 October, UN forces advanced toward the Chinese border, hoping to conclude the war by year's end.

The United Nations Command was concerned about the participation of the Chinese Communist Forces (CCF), but did not catch the signs and judged that Chinese involvement had waned. However, friendly forces suffered a massive surprise attack by the CCF on the 25th in the vicinity of Unsan and Onjeong-ri. The attack threw them into turmoil. Even though the 7th Regiment of the 6th Division of the ROK Army achieved success of reaching the mountains at the Amnok Riverside, the units were soon blocked. Thus, the participation of the CCF transformed the Korean War into a new war.