New Korean War Memorials at the UNMCK by nations participated in the Korean War. 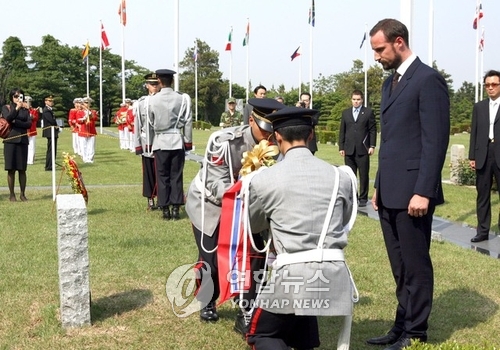 Their Royal Highnesses Crown Prince Haakon and Crown Princess Mette-Marit visited the UNMCK and lead an unveiling ceremony of the Norwegian Memorial on 10 May 2007 in commemoration of the Norwegian contribution in the Korean War.
80cm tall Norwegian Memorial made of granite had been designed and produced in and transported to the UNMCK.
The French Government also installed the French Memorial at the UNMCK last January this year and plans to hold an unveiling ceremony soon.
In November last year, the New Zealand Memorial found its home at the UNMCK. Built by the New Zealand Government on the occasion of the visit by Rt. Hon. Helen Clark, it was dedicated by the Prime Minister of New Zealand on 19 November 2005.
Currently there are 11 Memorials and Monuments at the UNMCK: The Wall of Remembrance (2006) with engraving of all the names of UN troops fallen in the Korean War, the UN Forces Monument (1978) built by the Korean Government, a Commonwealth memorial (1960) paying tribute the MIA of the Commonwealth countries (Australia, Canada, New Zealand, South Africa and the United Kingdom), a French memorial (2007), a Norwegian memorial (2007), a New Zealand memorial (2005), a Canadian memorial (2001), an Australian memorial (1999), a Greek memorial (1961) and two Turkish memorials (1959 and 1960).
Thailand and Philippines are in the planning to establish their memorials at the UNMCK to commemorate their participation in the Korean War although they have no soldier currently interred at the UNMCK.
Mr. Soon-bong Kim, the Assistant Custodian of the UNMCK says, “Although a half of century has passed since the Korean War, establishing Korean War memorials at the UNMCK will follow, to pay tribute to the heroic war dead who fought for the peace and freedom.”
List