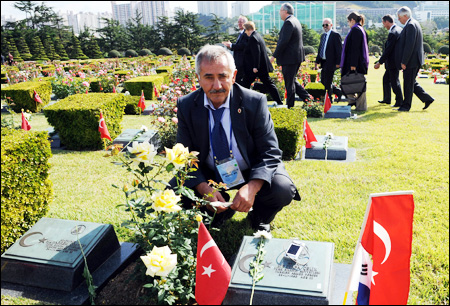 A family member of Mustafa Celik, a Turkish soldier who was killed during the 1950-53 Korean War, pays his respects at Celik’s grave at the U.N. Memorial Cemetery in Busan, Friday. Korea invited war veterans and their families from around the world to commemorate the 65th United Nations Day, which falls on Sunday. About 1.94 million U.N. troops from 21 countries participated in the Korean War and some 40,000 of them were killed and 120,000 others were injured or missing in action.