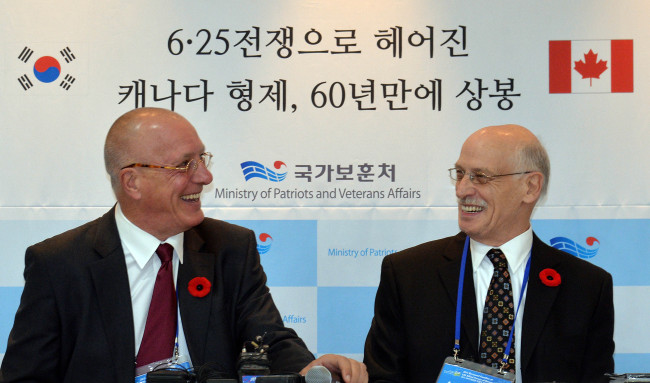 Andre Brisebois (right) and Leo Demay attend a press conference at the War Memorial in Seoul after meeting for the first time. (Lee Sang-sub/The Korea Herald)
Two Canadian half-brothers, whose father died on the battlefield during the Korean War, were united in Seoul Thursday after six decades without knowing of each other’s existence.

Andre Brisebois, 64, first found out about his brother Leo Demay, 60, in July when a Canadian media outlet reported on Demay, who works at the U.N. Memorial Cemetery in Busan, to mark the 60th anniversary of the armistice agreement.

Ever since, they have been in contact through the Internet. Their first face-to-face meeting was arranged by the Ministry of Patriots and Veterans Affairs this week. The brothers were adopted by different couples in 1953 and raised separately in Canada.

“To me, it is a new beginning. We have been speaking to each other ever since (the news report). He (Demay) is a wonderful guy to know,” Brisebois said during a press conference Friday.

To a reporter’s question of whether they have any feelings of bitterness about their father’s death in the battle here and their long separation, Brisebois said, “Life goes on and what’s past is past. I don’t carry any bitterness at all.”

Their father Andre Adelard Regimbald died on Sept. 5, 1952 ― the first day of his mission to defend South Korea against an invading North Korea backed by Communist forces from China and the then-Soviet Union.

Based on accounts from war veterans, Demay said his father died after being hit in the back of his head by a piece of shrapnel in an artillery barrage. Regimbald was only 20 years old when he enlisted to fight in the three-year war.

After retiring in 2007, Demay came to South Korea to have a better understanding of the country and later took a job at the U.N. Memorial Cemetery in Busan as the Director of International affairs. Brisebois lives in Canada.

Demay has written a book, entitled “War Ripples,” and plans to publish it next Monday. The book covers Korean War-related stories.

“It is ‘War Ripples,’ plural, because dropping a stone into a pond or waters creates many ripples and the Korean War created many stories and many ripples,” said Demay.