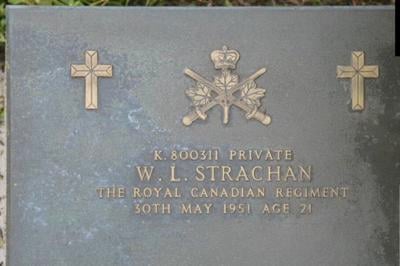 This is the headstone for the grave in a Korean cemetery of Kelowna soldier William Leslie Strachan,

who was 21 when he was killed in action during the Korean War.

Strachan was the last man from Kelowna to die in war.

It is testament to Canada's long history of relative peace that the last soldier from Kelowna to fall in war died
more than 70 years ago.

William Leslie Strachan's name is engraved on one of the 240 white crosses now erected in City Park in
advance of Remembrance Day.

Most of the names are those of men who died in the First or Second World War. But three men from Kelowna,
including Strachan, were killed in the Korean War.

Born on Sept. 14, 1929, he was too young to join his older brother Edwin John Strachan in service during
the Second World War. Edwin was wounded during the Liberation of Holland in 1944 but survived the war,
going on to work at Sun-Rype for 35 years.

Edwin was married for 60 years, and had three children, nine grandchildren, and two
great-grandchildren when he died in 2011 at age 85.

No such long life would be enjoyed by William Leslie Strachan.

Born on Sept. 14, 1929, he was 20 years old in the spring of 1950 when North Korean troops invaded South
Korea. In August of that year, the Canadian Special Army Force was created for service in Korea, alongside
troops from the U.S., Britain, and other countries.

More than 26,000 Canadians served during the three years of the Korean War and 516 of them died,
309 of whom were killed in direct combat with either North Korean or Chinese forces.

Strachan travelled from Kelowna to Vancouver to enlist on Aug. 22, 1950.

Canadian troops reached the front lines in February 1951. Strachan, a private in the Royal Canadian Regiment,
was killed in action on Hill 497 near Nuchon-ni on May 30, 1951.

He was buried in a shallow grave near where he died, but his remains, confirmed by 10 identification tags on
his body, were removed by a field recovery team on Sept. 10, 1951.