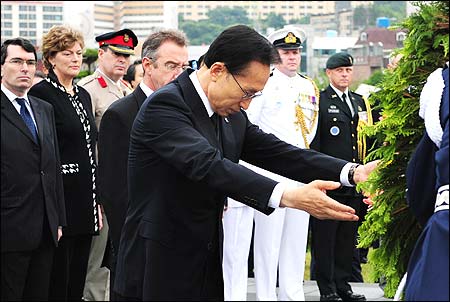 President Lee Myung-bak pays homage to the 40,896 U.N. troops who were killed in the 1950-53 Korean War, along with the ambassadors of the 11 countries that fought for South Korea, during their visit to the U.N. Memorial Cemetery in the southeastern port city of Busan, Friday. It’s the first time in 44 years that a South Korean president has visited the cemetery where some 2,300 U.N. soldiers are buried. Presidential aides said Lee visited the cemetery to send a message of peace to the world as Korea marks the 60th anniversary of the outbreak of the war on June 25. / Joint press corps