Many of those who participated in the “U.N. Peace Camp for Youth” last week were astounded by the economic, social and diplomatic advancements South Korea has made in the last 57 years from the ashes of the 1950-53 Korean War.

Organized by the Ministry of Patriots and Veterans Affairs, the week-long camp, which began last Tuesday, was designed for the grandchildren of the soldiers who fought for the South under the U.N. banner during the fratricidal war.

“Just to be where my grandfather was at such a horrible time, and then see the country in only 60 years, rising from the ashes, so to speak,” said Dorothée Sabine de Kat, a university graduate from the Netherlands.

Caroline Treider Hargreaves, a third year university student from Norway, said, “It’s been amazing to meet and hear all these stories people have about their grandparents, and then be able to see how far the country has come and become the ‘Land of the Morning Calm’ again.”

To mark the 60th anniversary of the outbreak of the war, the ministry expanded the scope of the annual event. The “Peace Camp” concept was first developed last year when 120 people from seven countries were invited.

Kim Sang-chul, a ministry official said that the camp was designed not only to maintain good relations with the U.N. allies that participated in the war, but also to ensure that descendants of those who fought know that the sacrifices their grandparents made paved the way for the development of Korea.

Twenty-one U.N. allies participated in the war. Of them, 16, including the U.S. and the U.K. and Canada, sent combat troops while Sweden, India, Denmark, Norway and Italy sent medical units.

After the welcoming ceremony at the War Memorial of Korea on Wednesday, the participants, mostly university students, took a tour of the War Memorial Museum. They then visited the Seoul National Cemetery to pay their respects to the fallen soldiers.

A couple of the highlights of the trip came on Thursday, when the group participated in a number of lectures on the history of the war and the prospects for peace.

The lectures proved to be crucial to the participants, as some felt that the history of the so-called “Forgotten War” was often glossed over in lieu of other wars.

“Especially the Korean War, it is kind of glossed over in our history classes. It is just like a placeholder between World War II and the Vietnam War,” said Andrew Millett, a college senior from St. Louis.

The most popular lecture was the one given by local daily Donga-Ilbo reporter Ju Seong-ha, a North Korean defector who came to the South in 2002. Ju lectured on national reunification and the steps that should be taken to accomplish it.

“That was the best one by far, since he actually lived in North Korea. I asked him a lot of questions afterwards. We talked about issues such as the upcoming transfer of power from Kim Jong-il to his son and the possibilities for change it had,” said Hargreaves. 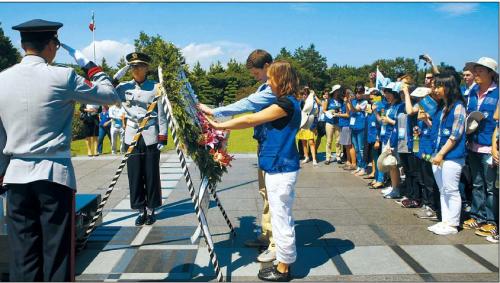 Following the lectures, the group took a trip to the Demilitarized Zone, the 258-kilometer-long, four-kilometer wide buffer zone dividing the two neighbors that still remain technically at war as the war ended in a truce, not a peace treaty.

The participants were able to sense the heightened tensions around one of the world’s most heavily fortified borders. Tensions have risen in recent months in the wake of the March sinking of the corvette Cheonan, which Seoul holds Pyongyang culpable for. The communist state denies its culpability.

“That was the best; you could actually come to the situation your grandfather was in. You see the North Koreans looking at you with their binoculars. That was definitely one of the biggest highlights of the trip so far,” said Kat.

After the U.S-led U.N. Command, North Korea and China signed the armistice on July 27, 1953, to halt the first major armed conflict of the Cold War era, the DMZ was established. The Military Demarcation Line runs through the center of the DMZ.

On Friday, the participants took the KTX to Busan to visit the U.N. Memorial Cemetery, where about 2,300 fallen troops from 10 U.N. allies have been laid to rest.

The peace camp took a more lighthearted atmosphere after the participants had paid their respects to the fallen, as the students changed into their beach attire and spent the rest of the afternoon at Haeundae, one of the country’s most popular summer destinations.

The remainder of the camp consisted of visiting a variety of cultural and tourist attractions in and around Seoul. Some of the highlights included a bike-riding event around the Han River, as well as a trip to the National Folk Museum.