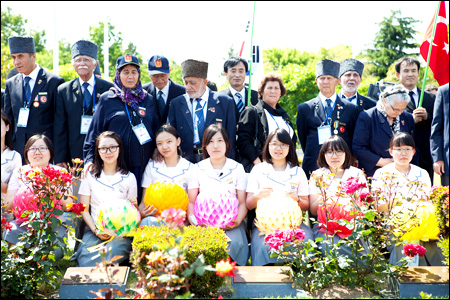 Ko Yu-jin, center in the first row, poses together with Turkish Korean War veterans, along with volunteer club students of Yeamoon Girls’ High School at the United Nations Memorial Cemetery in Busan. Nearly 50 Turkish veterans together with their families visited Korea to commemorate the 60th anniversay of the war in June.

High schooler in Busan leads campaign to thank war veterans for their sacrifice. 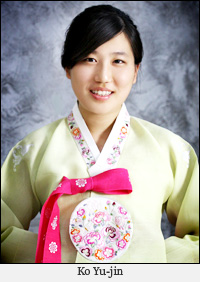 It has been 60 years since the Korean War (1950-1953) broke out and the young generation is largely ignorant about the tragic conflict.

But one young student is trying to teach her peers about the meaning of the war and give thanks to foreign veterans who fought for South Korea.

Ko Yu-jin, a junior at Yeamoon Girls’ High School in Busan, initiated a project to send “thank you” emails to foreign veterans last January.“Every time I pass by the memorial site, I think about the foreign soldiers who fought bravely in our country for the peace and freedom that we currently enjoy,” Ko told The Korea Times in an interview. “I wish for no more war here and around the world,” she added. She lives near the United Memorial Cemetery in the port city.

It was not easy for her to make contact with the veterans. First, she requested the Ministry of Patriots and Veteran Affairs to provide her with lists of foreign veterans, but it did not cooperate, citing privacy issues.

But the 17-year-old didn’t give up and scoured the Internet for contact information on the war veterans and she finally found a number of veterans overseas. Ko also created a website (www.UNpeacezone.com) with her younger brother to promote the project and many veterans visited.

“When I sent emails to several war veterans, I simply wanted to express my gratitude. I was quite surprised when I received replies from so many veterans, along with their friends and colleagues,” she said.

Many veterans appreciated Ko’s efforts and encouraged her. One such man, Michael Glazzy, said in a letter, “I have been to the beautiful U.N. Cemetery in Busan many times and truly appreciate that young people like you are determined to make it a special United Peace District. By coincidence, my wife and I have twin granddaughters that are juniors in high school. Someday I would like to bring them to Korea to see what a beautiful and progressive country you have.”

Another veteran, Ray L. Walker, said “I served there with the Marines in 1950. I am proud to have done so. Young people like you who take an interest in your history are a very great resource to your nation.”

Ko said she was very moved by the fact that some veterans participated in the war and made such a sacrifice when they were not much older than her.

Ko, also the head of a volunteer club at her school, served many veterans who visited Korea to commemorate the 60th anniversary of the war as a interpreter and guide, together with other club members.

She believes the children of the veterans will be Korea-friendly resources in the future so that they can contribute to boost relations between Korea and their countries.

Ko, together with her schoolmates, campaigned in various places from the beginning of the year to promote the United Memorial Cemetery to become a special United Peace District. Last May, the government finally designated it as the “Busan Nam-gu Special Peace and Culture Zone for the United Nations.”

“Unfortunately, the memorial cemetery has not been properly promoted or operated among the Korean people as well as foreigners. We hope that the cemetery will play a significant role as a unique and special peace district paying respects to veterans who sacrificed themselves during the war,” she said.

Ko said she will continue to write emails to Korean War veterans and guide those who visit the place as much as she can with her friends. “I would like to promote our country by sending booklets and pamphlets to the war veterans that say that today’s Korea is possible thanks to their sacrifices. I also want to serve as an ambassador to promote the district to the world,” she said. In addition, she plans to fundraise for veterans suffering from financial difficulties.

Asked about her future plans, she said she wants to study international relations law and become a specialist in the field.

“My role model is United Nation Secretary General Ban Ki-moon, who is, in my opinion, an exemplar of the status of Korea as one of the leading peace defending nations of the world,” she said.

“I want to do something worthy, such as promoting world peace transcending national, racial, and religious boundaries. I think that my project to promote the U.N. Peace District is the first step for the contributions I would like to make to society,” she added.