Two deceased Canadian brothers who fought in the Korean War will be reunited in their final resting place here after more than 60 years.

On Sunday, the ashes of Canadian veteran of the Korean War Archibald Hearsey were brought to Korea to be put to rest along side his older brother Joseph Hearsey at the United Nations Memorial Cemetery in Busan. The burial ceremony will take place Wednesday.

Archibald Hearsey’s ashes were brought to Korea as part of the Ministry of Patriots and Veterans Affairs’ program providing Korean War veterans with a chance to revisit Korea. The program began in 1975 and 28,500 veterans have visited Korea since then. 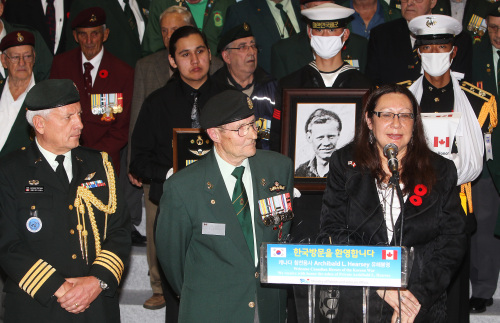 “The minister will honor the brothers as two great heroes of Korea and Canada who sacrificed themselves for freedom, democracy and world peace,” the ministry said.

Archibald Hearsey died last year in Canada after battling a lung condition for 25 years. His remains were brought to Korea by his only daughter Debbie Nancy Hearsey. His brother Joseph Hearsey died in Korea in October 1951 after he was wounded in a battle on October 13, 1951.

According to Debbie Hearsey, it was her father’s last wish to be buried with his brother who had enrolled to serve in the Korean War out of concern for his safety.

However, the brothers never met until the elder Hearsey was wounded. Joseph Hearsey died from his wounds and was subsequently buried at the United Nations Memorial Cemetery on Oct. 27, 1951. The younger Hearsey returned to Canada.

Although Archibald Hearsey returned home, he is said to never have stopped thinking of his brother and his sacrifice. However, he was unable to visit his brother’s grave, despite knowing about the program for Korean War veterans to visit Korea, due to his illness. He died in June last year.

The story was first conveyed to Korea’s Ministry of Patriots and Veterans Affairs by Canadian Senator Yonah Martin. The story fueled a fundraising campaign to enable Debbie Hearsey to make the trip to Korea.