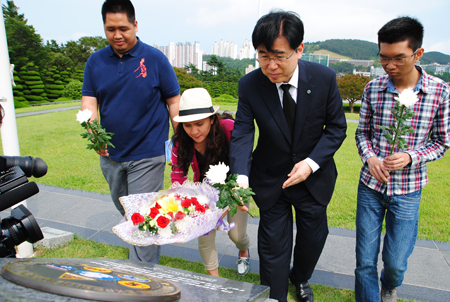 Park Chul, third from left, president of Hankuk University of Foreign Studies (HUFS), offers flowers to the memorial for dead Filipino soldiers at the U.N. Memorial Cemetery in Busan, June 16, together with three students from the Philippines whose grandfathers fought in the Korean War.
/ Korea Times photo by Kim Bo-eun 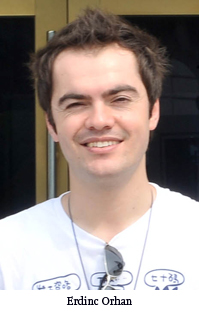 Erdinc Orhan’s grandfather, Mehmet Tas, was an army corporal during the Korean War. He left Turkey in 1953 and remained in Busan until the following year in 1954. At the time, he was just 20 years old; his grandson is now 25.

Mehmet Tas passed away 20 years after he fought in the war so Orhan wasn’t able to hear stories of the Korean War directly from him. Instead, he heard them from his father, mother and grandmother.

“I was very touched when I heard about the comradeship between soldiers. They would share their bread when there wasn’t enough to eat. They also took care of orphaned children and taught them Turkish songs,” Orhan said.

Due to his grandfather’s influence, he became interested in Korea and decided to major in Korean literature at Erciyes University in Turkey. 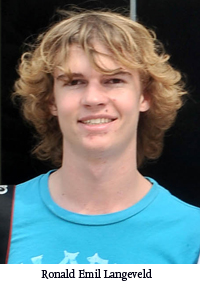 As an undergraduate he had the opportunity to study as an exchange student at Hallym University in Chuncheon, Korea in 2009.

And now, thanks to the scholarship program, he is back in Korea, pursuing his master’s degree in international development at Hankuk University of Foreign Studies (HUFS).

“I want to help promote and strengthen the ties between Korea and Turkey by becoming a bridge,” said Orhan.

He hopes to work for the Turkish government or the embassy but is also interested in becoming a university professor.

“Like my grandfather, who fought for Korea, I want to contribute to world peace,” he said. 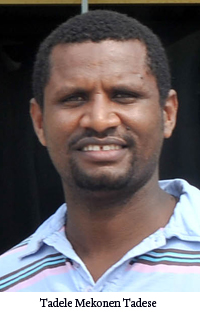 Orhan created a Facebook group page and added all his Turkish friends whose grandfathers participated in the Korean War. He hopes to be able to make the page global, so that descendants of Korean War veterans from other countries can also join.

“I am excited to be here at the U.N. Memorial Cemetery because it is my first time,” said Orhan. “Although we didn’t participate in the war, I can feel the air of brotherhood and peace affecting us.”

“I saw engraved on the memorials how old the soldiers were when they fought in the war. Many were younger than I am now. It made me think about how I had spent my early twenties compared to those young soldiers who sacrificed their lives,” he said.

“We often complain about life but those soldiers fought for their lives,” said Orhan. “This visit provided an opportunity to reflect back on our lives and remember the noble spirit of the fallen soldiers.” 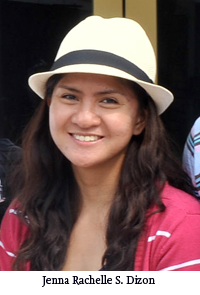 Ronald Emil Langeveld’s 85-year-old grandfather, Ronald Langeveld is a living witness of the Korean War. He is spending his later years in South Africa.

He was in his mid-20s when he came to Korea in 1953 as an aircraft engineer. He served in the air force and was based in Suwon for one year.

“He said his experience in Korea during the war was something truly unique, and that he can’t compare it to anything,” said Langeveld.

He said his grandfather had volunteered to go to Korea for the experience, because he was young and unmarried at the time.

“Although he didn’t actually fight, as he was a technician, he saw many of his friends wounded and die before his very eyes,” said Langeveld. “I think he was very brave.”

After paying his respects to his grandfather’s fellow soldiers at the cemetery, Langeveld said he was proud that he had a relative that was part of the war.

Langeveld came to Korea right after he graduated from high school and at 19, he is the youngest student among the descendants of Korean War veterans who are studying at HUFS.

He is currently taking the mandatory Korean language course in order to start his major studies next year, which he hopes will be in either computer science or economics.

“I believe studying here in Korea will offer an amazing experience,” said Langeveld. “It will be meaningful because I am spending part of my youth here in Korea just like my grandfather did, some 60 years ago.”

Tadele Mekonen Tadese’s father, Mekonen Tadese Weldmariyam, at age 80, is another survivor who fought in the Korean War. He is now living in Ethiopia, recovering from a heart disorder.

When Tadese’s father was 21 years old, he was an imperial body guard for the Ethiopian government. When the Korean War broke out, as they were considered the strongest young men in their nation he was sent with his colleagues to fight for the Asian country.

His father and his fellow guards protected an important oil pump near Busan for a year and two months from 1955.

“My father told me that it was not an easy mission, since North Korean soldiers kept coming to the oil pump to destroy it,” said Tadese. “South Korean civilians would also come to get oil, because they were poor and in need of fuel.”

However, for Tadese’s father, Korea will always remain in his heart.

“My father and fellow Ethiopians are happy that Korea achieved such great economic development,” said Tadese.

“When I came across the post which notified that HUFS was recruiting students through the scholarship program for descendants of Korean War veterans, I immediately prepared all the documents, because I did not want to miss the opportunity,” he continued.

He came to HUFS in February and is currently taking the Korean language course ahead of his master’s degree program in environmental science.

“Although learning the Korean language is not easy and we have to live on a tight budget, I believe being able to study here is a great opportunity, and I am very grateful to HUFS,” Tadese added.

Jenna Rachelle S. Dizon’s grandfather, Juan V. Dizon was dispatched from the Philippines for the 19th battalion during the war. He was an army colonel in Korea between 1952 and 1953.

According to Dizon, he worked as a treasurer in the military bank before he left for Korea.

“Unfortunately I did not have the opportunity to hear much from him about the war,” said Dizon. “He passed away in 2002, so even though I have a lot of questions I want to ask him now, it is such a pity that I can’t.”

“If I had the opportunity, the first question I would ask him about his life in Korea during the war would be what his daily routine was like,” she said.

But even though she hadn’t been able to hear stories from her grandfather, the visit to the U.N. cemetery was a special experience.

“I became very emotional when I saw the video that introduced the U.N. troops’ participation in the Korean War,” Dizon said. “It’s an honor to be here, and I am proud that my grandfather fought in the war.”

“I think I am really privileged to be able to study here in Korea. Not everyone gets the opportunity to pursue further studies, but thanks to my grandfather, I am able to do so,” said Dizon, who is to take a master’s course in international development after completing the Korean language course.