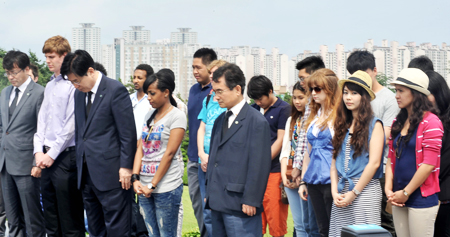 Sixteen students from six countries and faculty members of Hankuk University of Foreign Studies (HUFS) pay tribute to fallen soldiers at the U.N. Memorial Cemetery in the southern port city of Busan, June 16. The students are descendants of Korean War veterans. At third from left is HUFS President Park Chul. / Korea Times photo by Kim Bo-eun

The students, accompanied by HUFS President Park Chul and faculty members, paid their respects to the fellow soldiers of their fallen family members at the cemetery in the southern port city of Busan.

Students from Ethiopia, the Philippines, South Africa, Thailand, Canada and Turkey offered flowers and a silent tribute to the deceased at memorials for each nation.

U.N. troops, comprising of soldiers from some 21 countries including those which provided medical support, were dispatched to Korea and 40,896 of them were killed.

Of the fallen U.N. forces from some 11 countries, some 2,300 are interred at the cemetery, designated by the United Nations and established in 1951.

“The honorable soldiers fought for freedom and the democracy of Korea during the conflict,” Park said.

“Paying our respects to the fallen soldiers was a proud and touching moment.”

The students watched an introductory video and a ceremony where the U.N. flag and the flags of 22 nations including Korea were raised. There was also marching, a marching display from an honor guard drill team and a volley of shots fired in tribute.

“I became very emotional when I saw the video that introduced the U.N. troops’ participation in the Korean War,” said 25-year-old Jenna Rachelle S. Dizon from the Philippines, pursuing her master’s degree in international development.

“It’s an honor to be here, and I am proud that my grandfather fought in the war.”

The students were solemn as they paid their respects to those that had sacrificed their lives.

“Although we didn’t participate in the war, I could feel the air of brotherhood and peace affecting us at the memorial,” said Erdinc Orhan, a 25-year-old Turkish graduate student, also majoring in international development.

“It was an opportunity to reflect back on our lives, and remember the noble spirit of the soldiers.”

The grandfathers and fathers of the students served in diverse positions in areas across the nation. Some were in the air force as aircraft engineers in Suwon while others guarded important national facilities nearby Busan.

HUFS has been selecting students who are descendants of Korean War veterans from countries around the world in collaboration with the Ministry of Patriots and Veterans Affairs and the Korean War Memorial Foundation, since 2010.

Currently, around 30 students from eight countries are studying at both undergraduate and graduate levels at the university under full scholarships. The school is covering airfare, tuition and dormitory costs.

“HUFS will endeavor to repay the sacrifice of the fallen soldiers, through cultivating global leaders among their descendants,” said Park.

“We will increase support for the students, especially through encouraging greater participation from the corporate sector,” he said.
HUFS plans to ask Korean corporations abroad to cooperate in supporting the students.

This year, the Korean War Memorial Foundation covered the living expenses of 13 students for their first year and Aekyung Welfare Foundation provided 30 million won for scholarships.