BUSAN, Oct. 24 (Yonhap) -- In celebration of the 74th United Nations Day, which falls on Thursday, a large ceremony was held in Busan, South Korea's biggest port city, with the attendance of international Korean War veterans and diplomats from the participating nations in the 1950-53 war.

The ceremony has been held annually in Busan, 450 kilometers southeast of Seoul, to commemorate the founding of the United Nations in 1945 and remember U.N. soldiers killed in the Korean War. October 24 has been celebrated as U.N. Day since 1948.

This year's U.N. Day ceremony held at the U.N. Memorial Cemetery in Busan drew about 140 participants, including diplomats from U.N. member nations that sent forces to South Korea's rescue during the Korean War and overseas Korean War veterans and their descendants. 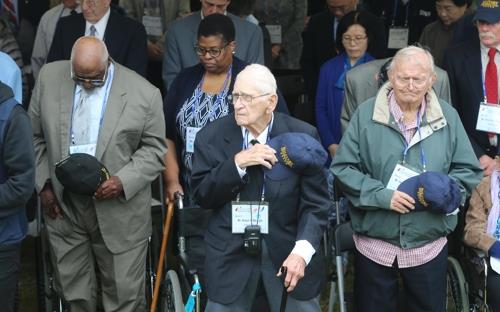 Notably, this year's ceremony participants included a 94-year-old U.S. Korean War veteran, accompanied by his wife, daughter and son-in-law, a former Swedish nurse who took part in the war and grandchildren of Korean War veterans from Turkey, the Philippines and Ethiopia.

In order, the ceremony consisted of the entry of the national flags of 11 countries that have fallen Korean War heroes buried at the UN Memorial Cemetery, commemorative speeches, the offering of flowers, a ceremonial gunfire salute, silent prayer and a commemorative performance.

"Appreciation from the Republic of Korea (South Korea) continues from one generation to the next and to the next. As time passes, respect and appreciation for Korean War veterans will further deepen," Busan Mayor Oh Keo-don said in his address. 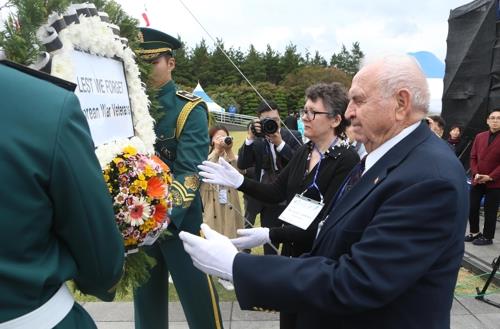 Philippe Lefort, French ambassador to South Korea, who serves as the chairperson of the Commission for the United Nations Memorial Cemetery in Korea (CUNMCK), said that the United Nations, born out of the hope to protect human rights, promote justice and move humanity toward social progress from the misery of war, can be proud of its success.

South Korean Vice Foreign Minister Lee Tae-ho noted that about 650 South Korean peacekeeping troops are currently contributing to international peace in South Sudan and Lebanon. "The Republic of Korea is the 10th-largest contributor to the U.N. and has sent a total of 17,000 troops to U.N. peacekeeping activities since 1993," Lee said.

On Wednesday, the U.N. flag used by U.S. General Douglas MacArthur during the Korean War was displayed at the U.N. Memorial Cemetery in Busan. MacArthur donated the flag to the U.N. Headquarters, which in turn donated it to the Busan cemetery for public display. 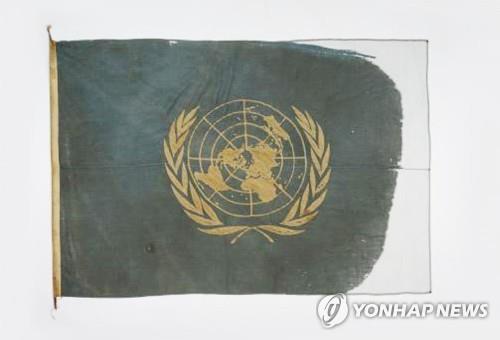 The Busan city government has designated the two weeks starting Wednesday as "2019 U.N. Week" to pay tribute to the soldiers who fought and died during the Korean War.

Various events will be held during Appreciation Week from Thursday to next Thursday and during the Commemoration Week from Nov. 1-11. An International Peace Conference will take place at the Westin Chosun Busan on Friday to discuss peace on the Korean Peninsula together with Southeast Asian countries, while the Peace Music Concert is slated for that night at Norimaru in downtown Busan.

Walking Event for World Peace will be held around the U.N. Memorial Cemetery this weekend.

In addition, the Busan city government will hoist the national flags of 22 countries that sent combat troops or medical units to South Korea during the Korean War on Busan Station Plaza and will project a "light of peace" on nearby buildings from Nov. 1-11.

The "Turn Toward Busan" Commemoration Ceremony will take place at the U.N. Memorial Cemetery on Nov. 11 in memory of international soldiers killed in the Korean War. A one-minute silence will be observed during the ceremony at 11 a.m.