Whenever they come to South Korea, foreign Korean War veterans never forget to visit the U.N. Memorial Cemetery in Korea to pay tribute to their comrades, who perished on the battlefields during the 1950-53 war.

The cemetery situated in the southeastern port city of Busan is the only one of its kind in the world and has now become a major tourist attraction. About 2,300 fallen warriors from 10 U.N. allies -- Canada, France, the Netherlands, New Zealand, Norway, Turkey, South Africa, the U.K., the U.S. and Australia -- have been laid to rest there.

Twenty-one countries participated in the war, which broke out on June 25, 1950 when heavily-armed North Korean troops invaded the South. Sixteen of them provided combat troops, while Sweden, India, Denmark, Norway and Italy offered medical support.

The U.N. Command set up the cemetery in January 1951. After its construction was completed in April that year, the bodies of the deceased buried at temporary sites, including those in Gaeseong, Incheon, Daejeon and Daegu, were moved there.

In November 1955, the National Assembly decided to permanently offer the cemetery site to the U.N. to honor the ultimate sacrifices of the fallen soldiers and proposed that the U.N. designate the site as a “sacred” place for the war dead. In December that year, the U.N. passed a resolution for the permanent management of the cemetery. 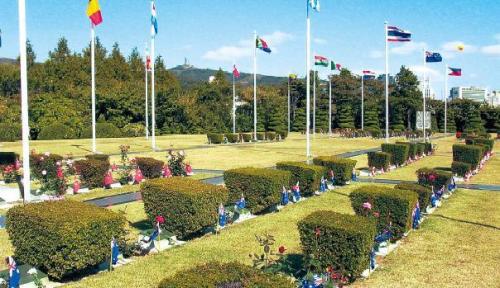 The U.N. Memorial Cemetery in Busan was set up in January 1951 to honor U.N. soldiers who participated in the Korean War. The Korea Herald
The cemetery has a wide range of exhibitions and monuments offering an insight into the war that ended in a truce in July 1953, leaving two Koreas technically at war.

On the Wall of Remembrance, which was built on Oct. 24, 2006 by the Korean government, all the names of the fallen warriors are inscribed, giving an opportunity for the post-war generations to remember their sacrifices. On the black stones of the wall, the names of 40,896 fallen soldiers from 17 countries are engraved in alphabetical order.

The Unknown Soldiers’ Pathway, established in 2008, consists of 11 steps, which symbolize the number of countries whose nationals are currently buried at the cemetery. Along each side of the pathway, there are also 11 cascades of water, 11 water fountains and 11 pine trees, all of which represent the 11 countries.

At a memorabilia hall at the cemetery, there is an exhibition of photos of the deceased warriors. The photos were provided by the bereaved family members of the heroes interred at the cemetery. There are also thematic exhibits held year round there.